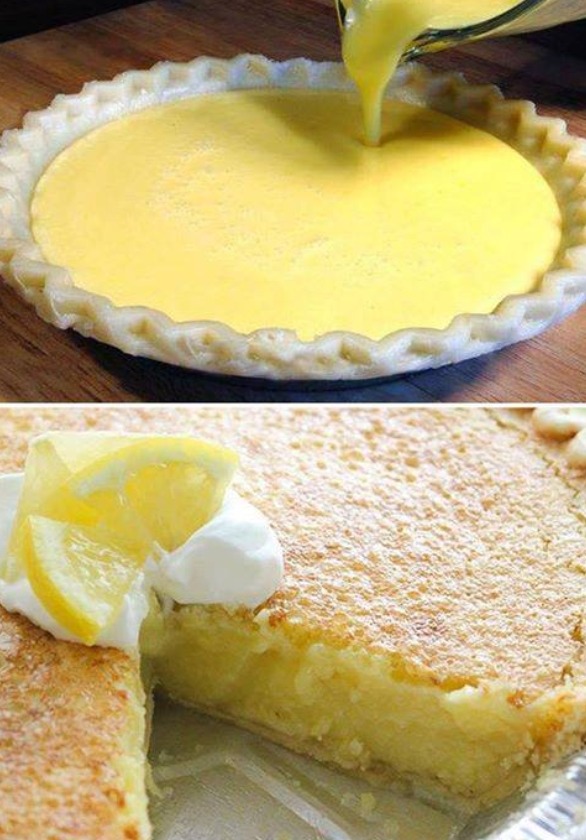 Arizona is 2nd in the country for producing citrus fruits. We love this pie – so easy and delicious! If you or your neighbors have a lemon tree, this would be a great time to pluck a nice big juicy one. If not, get to the store and look for the largest lemon in the bunch. This sensationally citrus pie is so simple that shopping for that lemon is going to be the hardest part of this recipe! The rest is as easy as…well, you know. So, who doesn’t love the idea that you can throw five ingredients into a blender and pour it into a pie shell and 40 minutes later you have the zestiest sweet-yet-tart lemon pie that tastes like you’ve worked on it for hours?

I mean you don’t even squeeze the juice from the lemon. You just throw the whole lemon–peel and all– right into the blender! I can’t thank Marte Ellis of Scottsdale enough for a new favorite that takes citrus and simplicity to a new level.

I had to laugh at the irony of it all as Marte, who was originally from Wood River, Nebraska, shared her story: “Well, as you know we have no lemons growing on trees in Nebraska, so I had to buy them at the store!” (Nebraska’s brutally cold winters, frost and a fairly short summer growing season makes not a happy lemon!)

Nevertheless, Marte found this gem of a recipe in her local Nebraska newspaper one day and thought that it looked so rudimentary; it would either be a disaster or a keeper. “Sometimes you hesitate to trust a recipe that’s so basic. My 11-year-old granddaughter Madison made this pie once. But she assumed that the recipe wanted her to boil the eggs. It was the funniest thing, four boiled eggs floating around in a soupy lemony mixture!” At last!

A fabulous zingy lemon pie that you can whip up in an instant and brag about it all day long! Just follow the instructions and enjoy a slice of Arizona Sunshine Lemon Pie. A citrus pie with a twist: simplicity!