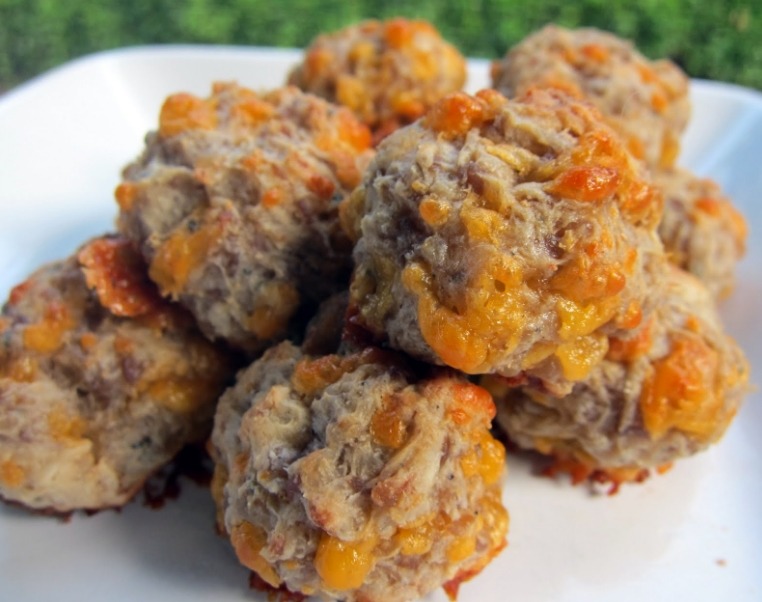 I wonder how long these little appetizers have been around. I think everyone can remember eating them at some point or another in their lives. Some may say they are old-fashioned but if you ever go to a party where these are served, they are always eaten up because they are familiar to people. And folks love ’em! They haven’t stood the test of time for nothing. The sausage ball has evolved some over the years but the basic recipe is almost always the same. Sausage. Bisquick. Cheese. This particular recipe adds cream cheese to the mix to amp up the creaminess and flavor of the original Bisquick sausage ball recipe.

But I will tell (and show you) that not everything I make turns out exactly like I planned. Like these sausage balls. The cream cheese adds great flavor, but it also causes these balls to spread a bit when cooking.

The original recipe I had didn’t say whether to chill them first or to use a greased or ungreased baking sheet. So I took a shot in the dark and put some parchment paper on my baking sheet

And they sort of spread out on me. So they weren’t so much balls as they were blobs. Which honestly, doesn’t really matter a hoot to me. The taste was so yummy. But I figured folks might want a more put-together circular form. So I tried it again on an ungreased sheet, thinking that maybe the parchment paper was the problem. Well, they not only spread out some and stuck to the pan…

…but they also got a bit burned on the bottoms. Now, I don’t think anything was necessarily wrong with that original recipe. The oven temperature seemed a bit too hot and maybe my baking sheet needed to be on a higher rack.

Like I said, the taste was still delicious. So I’m not really sure what I was messing up on. Maybe the original recipe was cooked on stoneware instead of metal? Maybe the mixture was chilled first? Who knows. But I really loved the taste of these so I went back to the drawing board to see if I couldn’t find a way to help them keep more of a circular shape. So what I decided to do was add a bit more Bisquick to the recipe to make it a bit more firmer. And I also decided to chill the formed sausage balls before baking. I also decided to stick with the parchment paper on the metal baking sheets because it not only helps with sticking but with clean up as well. It was worth it to make these a second time. These would certainly be a hit at any party!
To Find Out All The Yummy Ingredients And The Step By Step Directions To Follow for this Delicious recipes,Go to the next page.