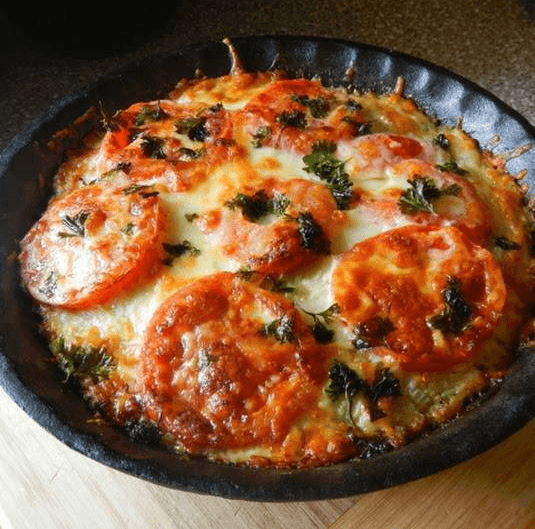 Relatively easy recipe, although a bit time consuming. Next time I would prep the eggplant and dough ahead so it could be a quicker dinner. The dough was very easy to prepare, but it puffed significantly when par baked since I didn’t dock it. Since it puffed so much I lost space in the tart pan so it didn’t take quite all the milk/egg mixture. I think I’ll do it again with other veg in addition to the eggplant – maybe some sautéd leeks, greens and mushrooms…
I made this for the first time tonight. It was delicious but….. very juicy. I followed the recipe exactly except I used a bought crust. But it was so juicy that the crust was gummy. I’m thinking this would be better without a crust and just some crusty bread for sopping? Or use less marinara. I’d definitely make it again though.

one of the best things I’ve cooked all year. I had no idea what to do with my eggplant, aside from eggplant parm, and this was a great find! My pie definitely overflowed a lot when I poured the egg mixture in but it didn’t seem to bubble over any more after that (once in the oven).

This is the second time I have made this, and it was very good. I roasted the tomatoes in a little olive oil first since there are no good fresh tomatoes in Cleveland in January! I think more eggplant would be good. Both times the pie was thinner than I would have liked, and it’s awfully rich. Another pound of eggplant would solve both problems nicely.