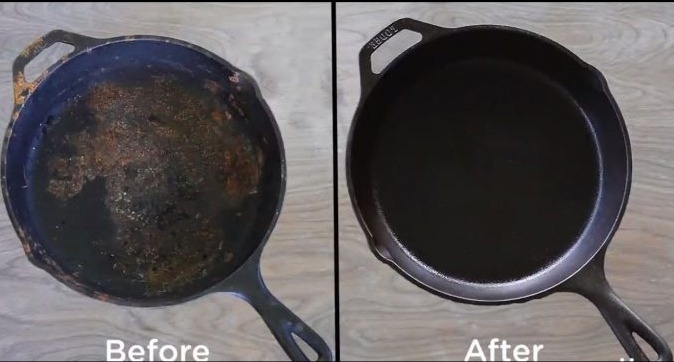 Instructions for cleaning a cast iron skillet often include a lot of don’ts: Don’t use soap, don’t use steel wool, don’t put it in the dishwasher. It’s almost enough to scare a cook off from cast iron completely!

Don’t be scared of cleaning your skillet! The brush is key to foolproof easy cleaning. If your pan is sporting stuck-on food, there’s no better tool to remove it than a good, sturdy scrub brush. This one’s designed specifically for cast iron.

There’s a reason (actually, a few) why cast-iron skillets are heirloom cookware: they’re reliable, indestructible, multi-purpose, affordable, and extremely easy to use. Best of all, the more you cook with cast-iron cookware, the better it prepares all your favorite cast-iron skillet recipes. That is, of course, as long as you care for it properly.

Properly caring for and cleaning cast-iron starts with understanding what sets this cookware apart from the stainless steel or non-stick pans in your kitchen cabinets. The secret lies in an age-old process: seasoning.

No, we’re not talking about seasoning like salt and pepper. In this sense of the term, seasoning refers to the process by which you add a fat—like oil—to your cast iron to create a protective varnish that keeps your pan non-stick.

It’s this seasoning that has been at the root of a hotly debated topic in the culinary world: how do you clean a cast-iron skillet so that you maintain this seasoning but also make sure the pan is clean? And is it ok to use soap on your cast-iron cookware?

One school of thought is that you should absolutely never use soap on cast-iron. The assumption is that it could remove this non-stick seasoning and get rid of all those built-up flavors that get caked into the pan from years of use.

Others argue that not using soap to wash a pan is uncleanly and downright gross.

Cast-iron cookware has been around for so long that its origin is somewhat unclear. What we do know is that cast-iron cauldrons and kettles were first used for cooking in Asia more than 1,300 years ago! (Think air fryers will last that long?) And cast-iron pots and pans continued to be the number one choice of home cooks for many generations, until the 1960s. That’s when nonstick cookware was introduced, and cast iron fell out of favor for their slick new Teflon cousins.

However, over the last decade or so, home cooks everywhere have rediscovered the many benefits of cast-iron cookware: First, cast iron is affordable, virtually indestructible, naturally nonstick, and has superior heat retention for even cooking and baking. Plus, it’s available in a wide range of sizes and styles, including fry pans, grill pans, pots, skillets, waffle irons, and Dutch ovens. And finally, many home cooks are switching to cast iron as a healthy alternative to aluminum and traditional nonstick pans.

However, despite all the well-established benefits of cast iron, some people are still a bit reluctant to make the switch, and here’s why: Cast iron has a reputation for being difficult to clean and quick to corrode, which isn’t completely unfounded. That’s because if it’s not properly maintained and seasoned, cast iron will rust and food will stick. And to make things more complicated, there’s much confusion about the best way to clean cast iron and whether or not you should use soap and water.

STEP 1: Cover the skillet in cooking oil.
STEP 2: Use the paper towel to coat the inside of the skillet entirely in the oil.
STEP 3: Put in the oven for an hour at 350 F.

Now your skillet has a little extra power behind it and your after-dinner cleaning just became that much easier.

As long as you maintain these two routines (scrubbing the skillet clean with salt and non-sticking it with oil) and you make sure to wipe out and clean your skillet after every use, you’ll have a pan that you can use for anything that will last a lifetime!