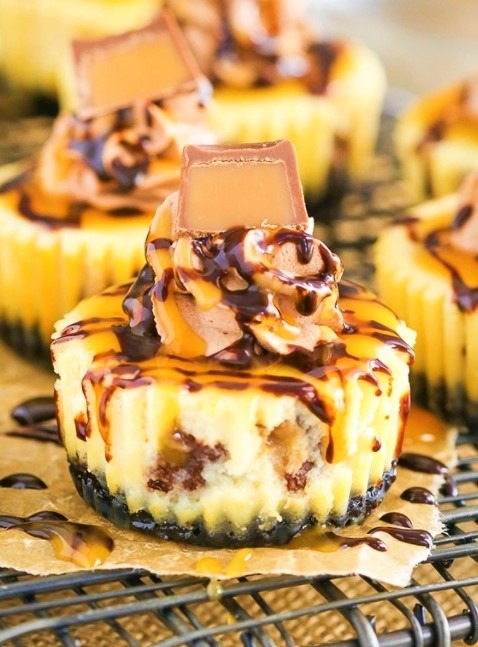 CRUST
1. Preheat oven to 325°F (162°C). Add cupcake liners to a cupcake pan.
2. Combine the oreo crumbs and melted butter. Divide the mixture between the cupcake liners (about 1 tablespoon per cup) and press into the bottoms.
3. Bake crusts for 5 minutes then remove from oven. Allow to cool while you make the filling.
CHEESECAKE FILLING AND TOPPING
1. Reduce oven to 300°F (148°C).
2. In a large bowl, mix the cream cheese, brown sugar and flour until combined (Use low speed to keep less air from getting into the batter, which can cause cracks). Scrape down the sides of the bowl.
3. Add the sour cream and vanilla extract. Beat on low speed until well combined.
4. Add eggs one at a time, beating slowly and scraping the sides of the bowl after each addition. Gently fold in the rolos.
5. Divide the batter between the cupcake liners and fill most of the way.
6. Bake cheesecakes for 13 minutes, then turn off oven and leave the door closed for another 10 minutes.
7. Crack the oven door and allow cheesecakes to cool for 15-20 minutes, then put in the fridge to finish cooling.
8. Once the cheesecakes are cooled and firm, make the whipped cream. Add the heavy whipping cream, powdered sugar and cocoa powder to a mixer bowl fitted with the whisk attachment and whip on high speed until stiff peaks form.
9. Pipe swirls on top of each cheesecake, then drizzle with caramel and chocolate sauce and top with half of a rolo.
Refrigerate until ready to serve.