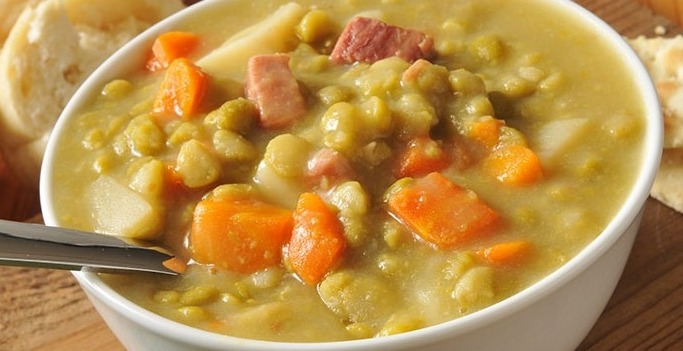 Wonderful soup as is. However, I have made a few changes to “kick it up, a notch”. I have added a bay leaf, a couple cloves of garlic, and a pinch of thyme. Instead of the ham bone, I used a ham hock and used up some left over ham cubes I had in the freezer. I also lightly sauteed the onions with some garlic in a little bit of EVOO before adding the Ham Hock. I also did half chicken stock and half water… sure makes a differance in flavor. I also find 2 cups of dried peas, instead of 2 1/2 is more than enough as this soup tends to end up a tad too thick.

I used this recipe as a base for my own creation. This was simply the best soup I have ever made. I did boil the ham hock in chicken broth instead of water for 1 hour ahead of time. Then I added the split peas and pepper (I omitted the salt). I added about 2 cups of diced carrots, 2 cups of celery and 2 cups of potatoes. I added 2 garlic cloves, some parsley flakes, thyme, onion powder (since I left the onions out), 2 bay leaves and the taste was amazing! I was going to blend the split peas before I added the other stuff, but they lost form and made the soup a lot thicker. I hope I can replicate this soup, it was off the hook!

This recipe is great and can be tweeked to your own preference. I threw all the ingredients into a crock pot, didn’t rinse the peas and threw the ham bone in with all the meat on. I cooked it on high for several hours. I probably added more liquid than the recipe called for but then I just threw in a whole bag of dried split peas..so thought I would need more liquid. THe soup was REALLY thick, and so I add more chicken broth to every serving. I also used Thyme instead of marjoram as i didn’t have that in the cupboard. I will definately use this recipe everytime I have a ham bone.

Very nice soup. One thing I changed in the recipe was the ham bone. I boiled the bone by itself for 1 1/2 hours before adding the rest of the ingredients. It added alot of flavour. Next time I make this I will omit the potatoes and add 1 clove of garlic. Makes LOTS of soup, will probably scale to 1/2 next time.

Outstanding! After reading a few reviews I tossed the following into a crock pot: 1 1-lb bag split peas, 2 quarts chicken stock, 1 ham bone, 2 cups cubed ham, 2 cups carrots, 1 diced potato, 1 diced onion, 2 cloves chopped garlic, 1/2 t salt, 1/2 t garlic powder, 1/2 t cumin, 1/4 t paprika, 1/4 t pepper, 2 bay leaves and a pinch marjoram. Cooked on high for 8 hours. Removed ham bone and bay leaves, and cook uncovered for last hour on low. So good! Update 3/13/11 I made this today on the stove instead of a crock pot…crock pot is the way to go. It takes longer, but it’s worth it.

1 pound dried green split peas, rinsed
1 cup sliced baby carrots
To Find Out All The Yummy Ingredients And The Step By Step Directions To Follow for this Delicious recipes,Go to the next page.