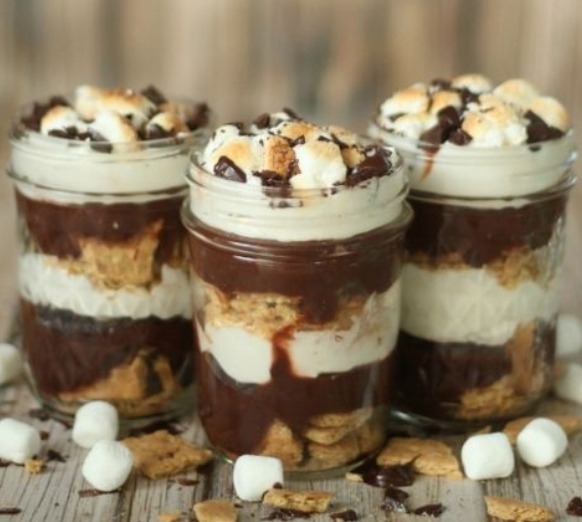 This dessert has many different components to prepare before it can be assembled. After each piece is prepared it can be set aside until you are ready to put it all together.
To prepare the chocolate pudding layer, melt the Hershey’s chocolate bar in a microwavable bowl in increments of 15-30 seconds. Stir often until the bars are completely melted. Allow the melted chocolate to cool slightly while preparing the pudding.
Follow the package instructions to prepare the instant pudding by whisking together the cold milk and pudding blend together until smooth. Once smooth, mix in the cooled, melted Hershey’s chocolate. Stir until combined and set aside with the mini marshmallows.
To prepare the marshmallow creme layer, beat the marshmallow crème and cream cheese together in a medium bowl until completely combined, about 2-3 minutes. Fold in the whipped topping and set aside with the other components.
Finally, use a food processor to grind the graham crackers into crumbs. Pour them into a medium mixing bowl with the melted butter to create a crust-like consistency. Now you are ready to put your dessert together!
Assemble your S’mores in 3-4 half pint (8 ounce) regular mason jars by pressing a layer of the graham cracker crust firmly into the bottom of the jar. Follow it with a layer of the chocolate pudding, then the marshmallow crème mixture. Repeat all three layers until the jar is full. Top with mini marshmallows
Optional step: To get a nice golden brown marshmallow topping, turn the oven onto the broil setting. Place the jars on a sheet pan and heat the marshmallows in the oven until the tops are browned, about 1-2 minutes. Watch carefully because they brown very quickly.
Garnish with additional chocolate squares and crumbled graham crackers, optional