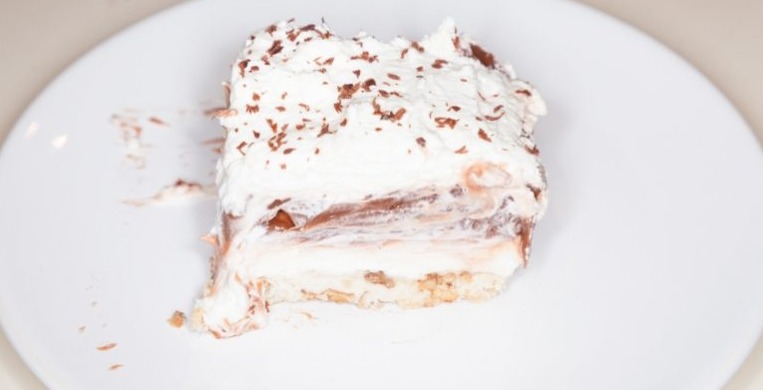 I had never in my life heard of Robert Redford dessert until I stumbled upon this recipe. Wow! Where have I been hiding?
Apparently, this chilled dessert is one of the best of its kind. I actually just made this yummy stuff this morning and it is in the refrigerator chilling right now as I type this. I’ll admit, I taste tested a little bit before I was supposed to because, you know, it’s supposed to chill and all. Well, whatever, it was ding dang delicious!

When it comes to chilled desserts, Robert Redford Dessert is always a winner at family dinner or social gatherings. A pecan crust is topped with a cream cheese layer, then a layer of chocolate pudding, and topped off with whipped cream.

If it’s called “Robert Redford” anything then you know it’s bound to be good! I cannot believe I have never made this stuff before. If you use instant Jello chocolate pudding, which I did, this recipe is super easy to make and doesn’t take much prep work at all. I am definitely going to be making this dessert again in the near future! So, lets get our butts in the kitchen and start making this amazing dessert, ASAP!

I am so glad that my mom decided to spring this delicious dessert upon us. She uses homemade chocolate pudding in her version but I used Jello instant pudding because I was to busy to deal with all of that.

1/2 cup (8 tablespoons) Kerrygold butter, cut into 8 pieces
1 cup Gold Medal flour
To Find Out All The Yummy Ingredients And The Step By Step Directions To Follow for this Delicious recipes,Go to the next page.