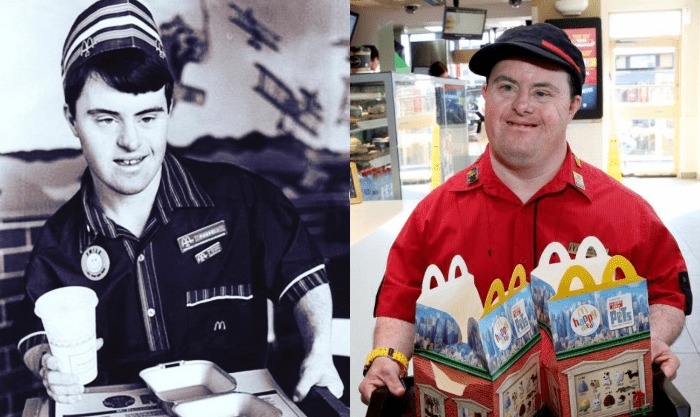 Russell, who is now 50 years old, is retiring after spending 32 years working at McDonald’s and set an example to everybody who has worked there with him.

Among society’s many misconceptions about people born with Down Syndrome, the most prominent one is the belief that such individuals are unable to lead a fulfilling independent life.

Thankfully, things are a lot better today with many setting the record straight on just how much they can achieve on their own. As with everything that challenges widespread beliefs, this wouldn’t have been possible without the pioneers who broke through the glass ceiling at a time when everyone told them it wasn’t possible.

Russell O’ Grady is one such pioneer who, with his determination to strike out on his own, became an inspiration to all.

Riyadh International Catering Corporation celebrated the promotion of 6 Down Syndrome employees in McDonald’s branches located in the central, eastern and northern regions of the Kingdom.

This initiative of employing Down Syndrome employees in McDonald’s restaurants was launched more than 15 years ago, and today we have more than 35 employees who work hard and diligently in all of our branches as well as in the company’s headquarters. With their determination and diligence, 6 of our Down Syndrome employees who have completed 3 years with us were promoted to higher positions in the branches they work in.

McDonald’s aims to hire 15 new employees in several regions, bringing the total number to 50 Down Syndrome employees working in its branches. McDonald’s has signed several agreements with the Ministry of Education in Riyadh and Qassim, the Special Education Department, to employ Down Syndrome students. A special approach has been developed to deal with and handle them through establishing a special committee covering 5 departments of the company to follow up the workflow and development of the Down syndrome employees in their workplaces and to make semi-periodic reports that are reviewed by the committee to evaluate and develop its Down Syndrome employees as well as follow up on their special requests and keep track of their progress.

Russell has Down syndrome, a genetic condition that affects about 1 in every 700 newborns in the US each year. In 1984, when he was just 18 years old, Jobsupport helped him find a job at Northmead McDonald’s. Jobsupport is an Australian government initiative that helps people with intellectual disabilities to find paid employment.

“We’ve got regular customers who come in to see Russell on Thursday and Friday, and the staff look after him, so we’re going to miss him,” said McDonald’s supervisor Courtney Purcell. In an email to CTV News, the assistant manager of JobSupport, Wynn Visser said that Russell’s impact on his community has been exceptional. “Everybody knows him and they really love him because he always stops to shake hands and say ‘Hi’ to everyone he knows. He has only told me he will miss seeing his friends at work (who are mainly young girls who make a fuss of him), his boss and all the people who call in to see him,” she said.

Despite not having any job experience, Russell impressed everyone with his job ethics and became a beloved employee to his manager, colleagues and especially customers. Over the years Russell became a local celebrity, with many people coming to visit him at work and greeting him on the street.

Russell’s brother Lindsey said that their family is incredibly proud of him for his dedication to work. “He’s kind of blase about it but loves his work very much. He’s pretty cheeky sometimes. He’s my big brother and he keeps me in line,” he said. The iconic McDonald’s employee’s father Geoff O’Grady previously revealed that his son would often get stopped for handshakes by people on the street. “He’s very affectionate, dearly loved and appreciated, to such an extent that we just don’t believe it,” he said. Mr. O’Grady also stated that having a job changed Russell’s outlook on life. “Somebody said to him ‘are you handicapped?’ and his answer was ‘I used to be when I went to school, but now I work at McDonald’s.'”