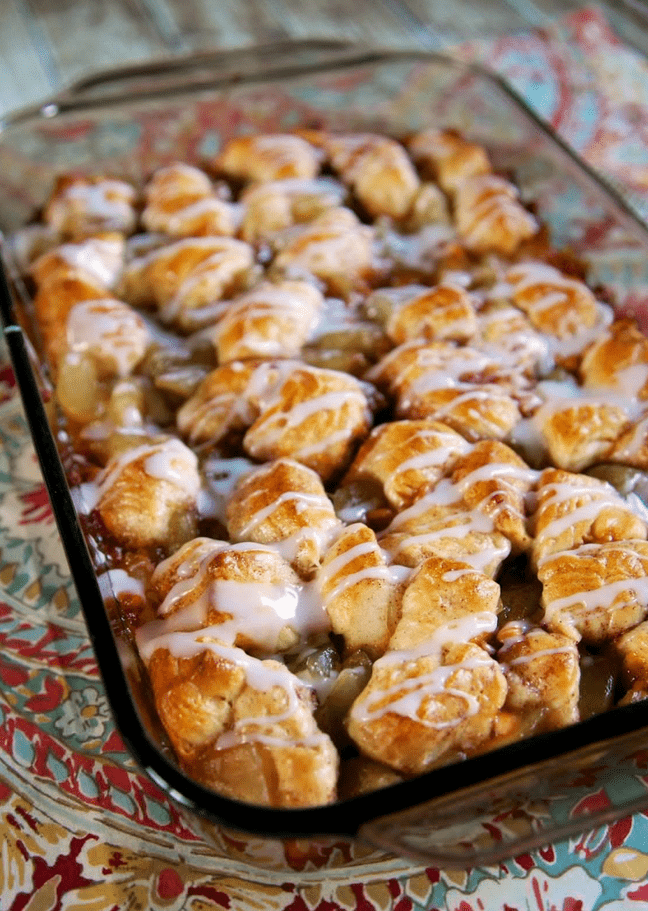 Spray a 9×13 inch casserole pan with cooking spray and preheat your oven to 350 degrees Fahrenheit.

In a large mixing bowl, whisk together the dark brown sugar and cinnamon until combined.

Open the cinnamon rolls and cut each into fourths using a pizza cutter.

Place the cinnamon roll quarters into the bowl with the sugar and cinnamon mixture and toss gently until the rolls are evenly covered.

Scoop the entire contents of the large mixing bowl into the prepared casserole pan and gently spread it out into an even layer.

Pour the melted butter all over the pan, focusing on the edges so that they don’t dry out.

In a medium sized bowl, mix together the apple pie filling and the caramel syrup until combined.

Use a knife or fork to cut the apple slices into bite size pieces.

Bake for about 35-40 minutes or until the cinnamon rolls are firm to the touch and beginning to turn golden brown.

Remove from the oven and allow to cool for 10 minutes before drizzling it with the icing from the cinnamon roll cans and the extra caramel syrup, optional.