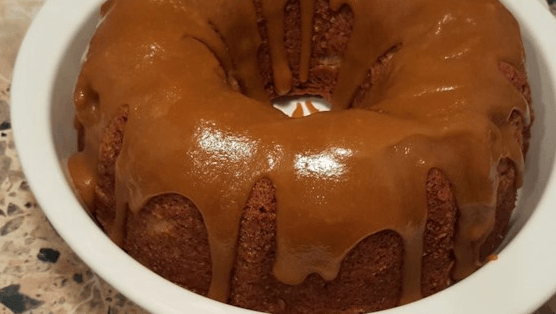 i hate when people change everything and then review the recipe poorly BUT i have made this many times (exact instructions first then made changes). this cake rocks. the glaze is delish. i find light brown sugar tastes way better in it than dark. i also baked it at 325 for 70 min. i used half white and half brown sugar and sub’d apple sauce in for 1/3 the amount of oil. (1/2 cup ap. sauce, 1 cup oil) i also increased cinnamon to 1 teaspoon. that’s my fave way. made it for my aunt’s bday. she hates sweets and had a second piece!

I had baked my own cake and really wanted a caramel/nut topping. I used this topping and put pecans on top. The sauce is excellent!!!!!

This is pretty good. But like others I doubled the cinnamon after tasting the batter and realizing there wasn’t enough. Other than that, and baking for 70 minutes at 325 (too many people suggesting that to ignore) I made this exactly as written. This needs more spice for my taste. Next time I will add allspice and cloves, like in my mother’s apple cupcake recipe. The glaze is nice, but next time I will try a thicker caramel frosting.

I needed a glaze that didn’t call for confectioner’s sugar as I had run out. I used this to top a pineapple cake and it was awesome!

Great recipe. I brought the cake to Thanksgiving and everyone really enjoyed it. I did make a few changes ~ I used 1 cup of butter (rather than the oil) and a 1/3 cup of applesauce, doubled the cinnamon and added nutmeg. Next time I’ll add a bit more cinnamon and more nutmeg. But still really yummy!