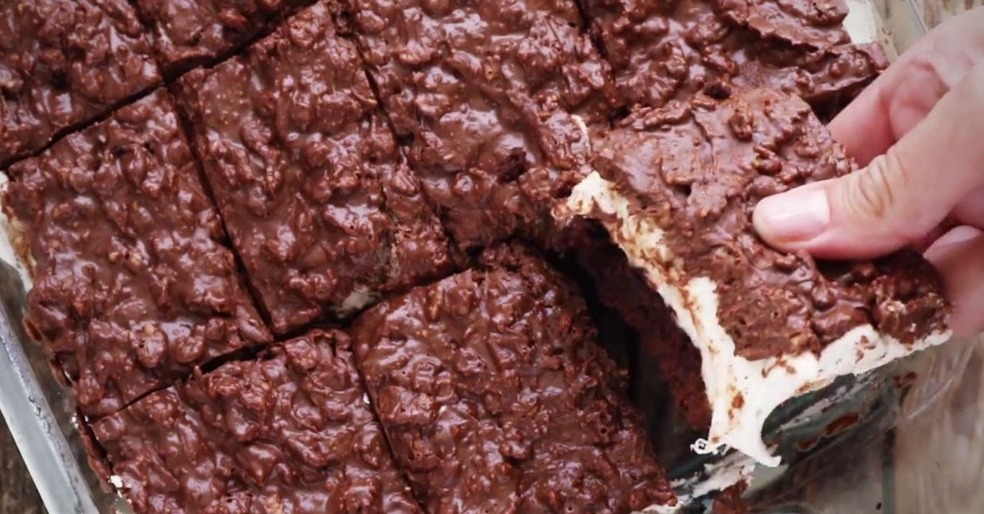 While the recipe I’ve used for these bars for probably 20-plus years goes by a different name, it varies only in that it calls for milk chocolate chips (which I prefer) rather than the semi-sweet. Since package sizes of brownie mix vary, I also always follow the package directions rather than what’s directed in this recipe. This is a real crowd pleaser for those who like their sweet treats rich, gooey and decadent and is easily put together with pantry ingredients likely already at hand. Once the bars are firm, there is no need to keep them refrigerated.

This is the second year I’ve made these to pass out to friends and neighbors during the holidays and I always get such great compliments on them. They are so gooey and delicious, and the crunch from the rice crispy puts it over the top! I recommend using Betty Crocker’s fudge brownie mix and under bake by a few minutes so that when you put the marshmallows on top and continue cooking the brownies won’t get too done by the end. Cover the entire brownie mix with the marshmallows because once they’re baked you don’t want to try and spread or smear them or you’ll just get a mess. Really let it cool before pouring the chocolate/peanut butter topping on so the marshmallows won’t smear off. Such a good recipe!

WOW!! These were GREAT! They are very rich! For the brownie portion I used Ghiradelli brownie mix from Costco but followed the directions on the box and then put it in a 9×13 inch glass dish for 28 min. I didn’t change anything else. I think that your favorite brownie mix/recipe is what you should use. We had several people over for dinner and served this for dessert. Everyone LOVED it! It is now one of our favorite desserts. Next time I am going to try some of it without the rice krispies because I think that I personally will like it better without them but everyone else liked the crunch.

All I can say is YUM! I made them as written and loved them, but this is also a good base for modifying. Add different nuts and/or white chocolate chips to the brownie. For the person who rated it one star because the marshmallows were too chewy, you baked the marshmallows too long! I baked the dish just until the marshmallows puffed up with and a hint of brown. No longer.

I too used the D/H Dark Choc Fudge Brownie mix. The mix was not the amount the recipe called for (it was less). Regardless, I followed this recipes measurements and time and the brownie turned out great. The chocolate topping is delish! I do not recommend refrigerating this because the marshmallows got too stiff. My guests loved it and even wanted to bring some home to share with their kids and husbands. I really liked the richness and the flavors of each layer. I will definitely make his again.

1 package fudge brownie mix (13-inch x 9-inch pan size)
1 package (10½ ounces) miniature marshmallows
To Find Out All The Yummy Ingredients And The Step By Step Directions To Follow for this Delicious recipes,Go to the next page.