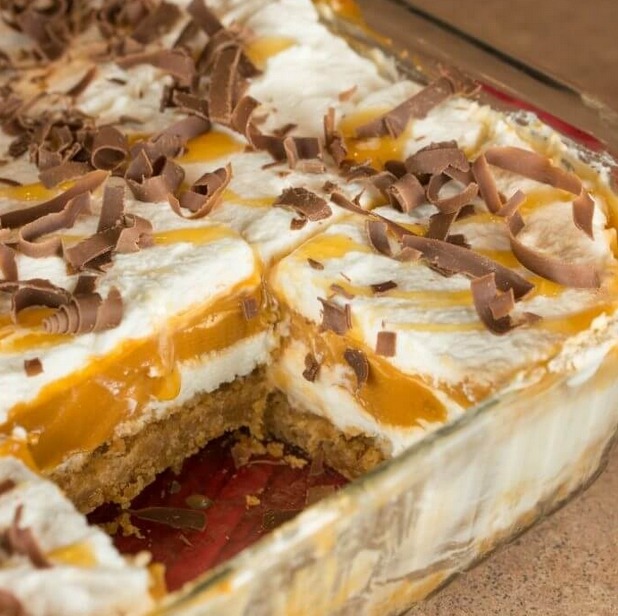 Recently, I’ve become a little bit obsessed with lush cakes. Honestly, can you blame me? This dessert is so rich, so creamy, so…lush. When you dip your fork into a slice, it sinks through layers of fluffy whipped topping, creamy pudding, sweetened cream cheese, and finally a crumbly, cookie-like crust. Raise it to your mouth, and you get all four luscious flavors in one bite. Doesn’t that sound worth obsessing over?

So I’ve been experimenting with different versions of this dreamy dessert. I developed a Pina Colada Lush Cake, then followed up on that success with a tangy Lemon Lush Cake (recipe coming soon). Then I thought I should try to branch out a bit from fruit flavors, so I started thinking about what other flavors would work in this cake-pudding combo. And right away the answer leaped out at me: butter pecan.

Once I had the initial idea, this Butterscotch Lush Cake practically came together on its own. I just added some chopped pecans to the crust layer, spread on the sweetened cream cheese, spread on a layer of creamy butterscotch pudding, and topped it all off with whipped topping and more pecans. With its rich, sweet combo of pecans and butterscotch, this may be my most decadent lush cake ever. At least, so far.

Preheat oven to 350 degrees F. Grease a 9×13″ baking pan with non-stick cooking spray, set aside.
Im bowl cut together your butter and flour until crumbs form, stir in your pecans.
Press into bottom of pan and bake in oven for 20 minutes, remove and cool completely.
To make filling, beat together your cream cheese and powdered sugar until smooth, add in your whipped topping and beat again until combined, spread over crust, set aside.
In another large bowl mix together your pudding and milk and whisk until combined and soft set, pour over filling layer, refrigerate 3-4 hours until set.
Before serving spread whipped topping over pudding layer and sprinkle with pecans.