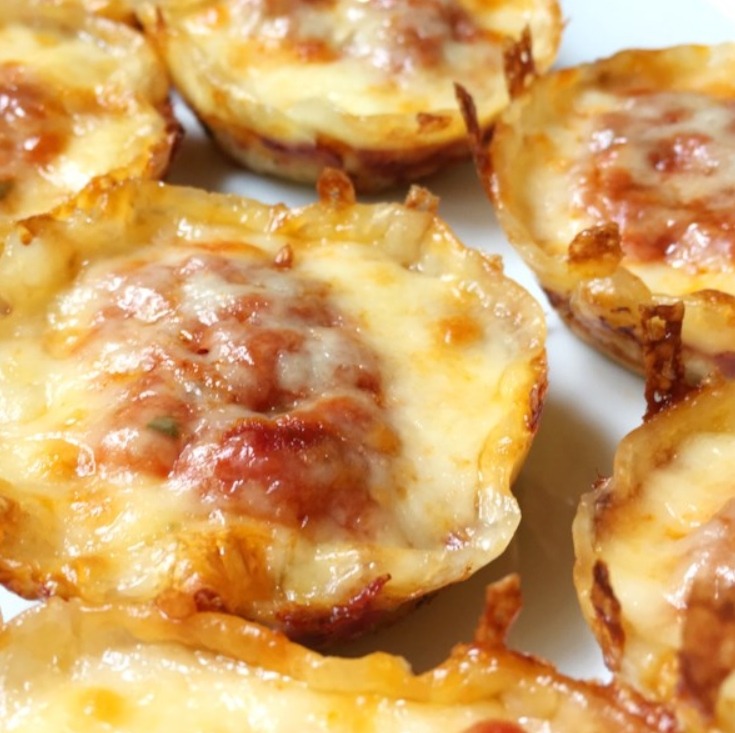 Just like its big relative, cauliflower crust pizza, but better! Easy and fun to eat, it’s sure to be a crowd pleaser!

I made a larger quantity to fit a 9 x 13 baking dish. I lined the dish with parchment paper, then mixed all the ingredients, added a little bit extra cheese than what was called for, put the mixture into the baking dish, patted it down, and baked it for 30 minutes. After cooling, I picked up the parchment paper at the sides, and set it on the counter. Then I cut it into strips. We ended up dipping and then covering our individual slices with spaghetti sauce…omg…amazing!

Love this recipe. I’ve tried the bigger version before, but this bite-size held together much better. I didn’t have fresh mozzarella so I used the grated stuff that comes in a can. I also threw in some feta cheese. I put in some spices called “pizza seasoning” into the crust. I used squeeze garlic verses the garlic powder. we had some cooked hamburger and tiny pepperoni so I threw that on for a topping. Even my hubby who is disgusted by these type of bread replacement recipes liked them! This will be our new Friday night pizza go-to.

I made this for my parents who must eat gluten free. My dad hadn’t had pizza in a long time and he said it was a success! My mom said it was tastier than some pizzas she’s had from restaurants. I made it as written except cut the mozzarella in the “dough” to a half cup, and spread it (on parchment) like a traditional round pizza instead of using a muffin tin. After 15 minutes of cooking, I flipped it and cooked it an additional 5 minutes. Then I added the toppings and cooked long enough to melt the cheese on top. I felt the other ingredients and spices were perfect as written. As a second option, we have used some cheddar in the topping cheese and used sweet peppers and onions…yum!

1 large head cauliflower, cut into large chunks
2 1/2 cups shredded mozzarella cheese, divided
To Find Out All The Yummy Ingredients And The Step By Step Directions To Follow for this Delicious recipes,Go to the next page.