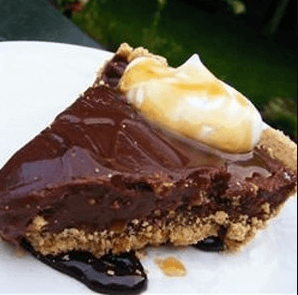 I used this recipe, actually, as a starting point. Here are the changes I made: first, I made only one pie instead of two, so I halved the ingredients (except for the pudding); second, I used a regular pie crust instead of a graham cracker crust; third, I only used 1 1/2 cups of milk with the pudding to make it set a little firmer; and finally, I made a peanut butter crumb topping from 1 T peanut butter mixed with powdered sugar. I then sprinkled the topping over the whipped topping on top – it made it look really classy!

My husband loves chocolate an peanut butter but isn’t into graham crusts, and this was quite a hit! And it was so fast, I know this will be used again in the very near future.

I first made this from the original recipe with no changes, and it was good, but the peanut butter layer was way too thick and way too sweet. It actually crumbled because it was so dry from all the powdered sugar. So when I made it again, I only put 2 cups of powdered sugar, doubled the chocolate pudding, and then I put a little of the peanut butter mixture into the chocolate pudding mixture.

MMMMM! I also put less milk, using the “pie” instructions from the side of the pudding box. I entered it in a pie contest, and even though I didn’t get 1st place, I had a few people tell me they would have given it first place because it was so delicious! Funny, when I came online today to print out the recipe, I noticed that the others who altered this pie made the same changes that I did. Guess it’s a winner!

I added a layer of thinly sliced banana between the peanut butter and chocolate pudding and sprinkled the top with chocolate chips…very very yummy!

This pie is a family favorite and is requested at many gatherings. My family LOVES chocolate and peanut butter, but they also love oreos. So, I found a way to combine them all with this recipe! I use two Oreo pie crusts instead of the graham gracker crusts and top the pie with mini oreos surrounding the edge and crushed oreos sprinkled over the middle.

It looks and tastes fantastic!! I also make the changes suggested by others by reducing the confectioner’s sugar from 3 cups to 2 cups, the milk from 2 cups to 1 1/2 cups and doubling the pudding mixture (with 1 1/2 cups milk per 3.9 oz. pudding package). I’m not sure if it makes a big difference, but I use chocolate fudge pudding instead of regular chocolate. My family cannot get enough of this pie and talk about it year round! Yum!!