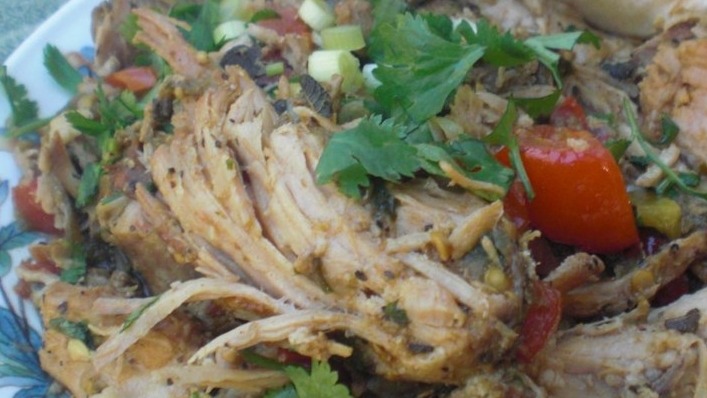 So delicious. i have never had green chili before, but my husband had some (in okinawa of all places) and loved it, so i searched for recipes and made this having no idea what it would taste like. can i just say its super delicious? holy. cow. i used the canned green chills, the cheapest salsa verde walmart sold and a teeny little beef roast that i chopped up, and it was awesome. i can only imagine how much better it is completely from scratch… so awesome.

I love Chile Verde; but, despaired ever finding the perfect recipe. This is it and soooo easy to make! I didn’t have any fresh roasted chilies, so I used canned-5 of the little cans to equal 2 cups or so. I increased the garlic to 6 cloves as suggested. I also used 1 can of diced tomatoes with added chilies. I chopped the onion, 2 of the cans of the chilies, the can of tomatoes with juice and the garlic together in my food processor. I browned the cubed beef in olive oil and seasoned it with salt and pepper. Then, all of it, including 4 cups of chicken broth went into my crock pot. Near the end of cooking, I added the dried oregano and the pinch of cloves. I never would have believed that the clove pinch would make such a difference, but it did. I don’t usually add cloves to recipes because I don’t care for it; however, in this recipe, it is a must! Just before serving, I made a roux of olive oil and flour to thicken the sauce. We made smothered Chile Verde burritos and it was delicious!

Just won first place in the company chili cook-off with this recipe! I doubled the recipe to yeild 12 servings, but reduced the liquids…only used 4 cups chicken broth and drained the tomatoes; this gave a perfect “chili-like” consistancy. Substituted pablano & anaheim for Big Jim chiles since I live in the mid-west and couldn’t get any Big Jim. It was a sure hit!

Wow! I lived in Colorado for several years and had lots of chili verde but this is the best I’ve ever had, or made! I must say that I wasn’t keen on the tomatillo sauce because I don’t care for it but after cooking, resting, reheating and eating that and the pinch of cloves made the dish fantastic!!! I recommend that each person make the recipe for the first time exactly as written. If you want to make changes after that then do. I also recommend making one day, cooling in fridge overnight and then reheating for best taste. Once again, the biggest surprise was the pinch of ground cloves……really makes the dish. Served ontop of freshly mashed potatoes. OUTSTANDING!!!

1 tablespoon olive oil
1 1/2 pounds cubed beef stew meat
To Find Out All The Yummy Ingredients And The Step By Step Directions To Follow for this Delicious recipes,Go to the next page.