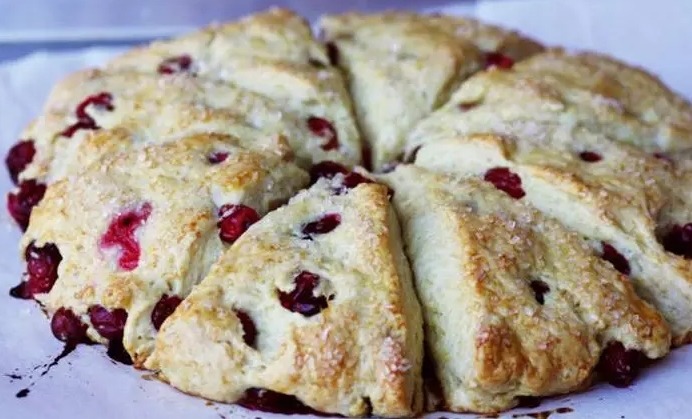 This is a PERFECT recipe. Don’t be confused by the instructions to knead the batter. I think the author just means to mix the berries and nuts well. Instead, I dropped rounded spoonfuls on a baking sheet and baked at 375 for 20 minutes as instructed. These scones couldn’t have been any better from a New York City bakery! I’ve made three batches of this recipe in one week and everyone who has tried one has raved (and everyone thinks they must be so hard to make! I’ve got them fooled!) I use the Crasins found next to raisins and leave out the sugar and orange. For variation, I’ve substituted chocolate chips and walnuts. DELICIOUS and PERFECT every time!!!

This was so good. I used dried cranberries instead of fresh, delicious. I also used sliced almonds instead of walnuts. Instead of half and half, I used one cup of vanilla yogurt and 1/4 cup of skim milk. I dropped tablespoonfuls and it made 15. They baked in 17 minutes. They were fast and easy. I can’t wait to try it again.

As other people mentioned, I had to add some extra flour because the dough was too sticky. I also used dried cranberries (5 ounce bag) as fresh ones were out of season. I added a little water to the dried cranberries so that the sugar would stick. The scones turned out better than I thought they would as I was scraping the still sticky dough off my counter. My brother, who is quite stingy with compliments, said “they were good,” which is top rating coming from him. Thanks for the recipe.

We’re big scones fans around here and these were excellent. I did add a touch more flour, though scones make a sticky dough. I also drizzled an orange glaze over them when slightly cooled to make them like the ones we get at Starbucks! Very good.

VERY delicious and they come out looking and tasting like I hoped! And fun to make! I took another reviewers advice and used a small containor of plain yogurt and it was great. Dough will be sticky, so have extra flour on the side for your board, hands and utensils!

Made these scones for Thanksgiving and was thankful that I did. Thye were wonderful. I did not knead by hand as they were kind of sticky I just mixed in the bowl until they were combined but not over worked. I did not add extra flour as I did not want them to be to tough. This recipe is perfect and you get a nice fluffy scone that is not as dense and others I have tried. For the others that complained that this dough was to sticky you dont want a heavy scone and this is not heavy and yes it does spread when you bake it. if you use two cookie sheets and place the dough on it and shape it with your spatula they do turn out perfect. The only change I made was to use lemon zest as I did not have any oranges. I have tried other recipes that use lemon with cranberries instead of orange and it is a nice surprise when you bite into it and get the refreshing lemon burst. Loved these so much I am making another batch right now. This will be the only scone recipe I will use. Despite a few of the low ratings this really is the best scone recipe. The only thing I can say is that they bake much better in a gas oven than electric. I have used both and they seem to spread more in an electric oven.

Dry Ingredients
2 cups white whole wheat flour
1 tablespoon baking powder
To Find Out All The Yummy Ingredients And The Step By Step Directions To Follow for this Delicious recipes,Go to the next page.