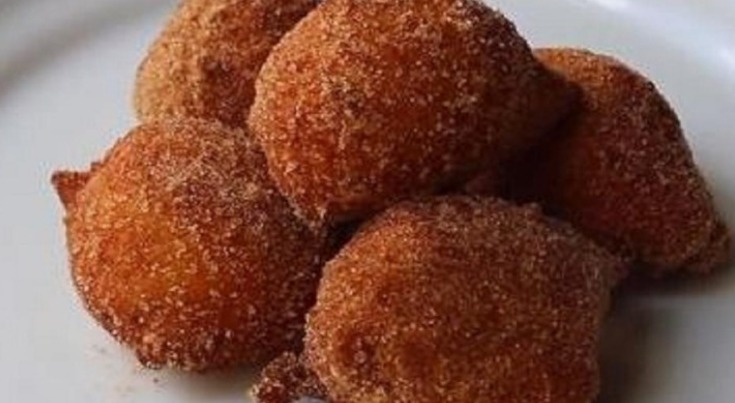 These are amazing right out of the fryer. Serve them with caramel sauce, and pass the milk and coffee for a great dessert! I doubled the sugar in the batter and added a few extra dashes of cinnamon and nutmeg to boost the flavor. I used a small cookie scoop to portion them into the hot oil. (I found that with spoons, they’re much bigger, and they don’t get cooked in the middle before the outsides brown.) And I rolled them in cinnamon sugar while warm. Mmm!

These were so good, I ended up making them three times over the holidays! The first time I didn’t leave them in the oil for the allotted time, taking them out when the outsides looked done. Big mistake. They were not done in the center. Second and third batches I followed the instructions and they turned out great. They are crispy on the outside and velvety on the inside. I rolled mine in cinnamon sugar which compliments the subtle pumpkin flavor beautifully! I will definitely make these again and again!

Fun to make and amazing to eat! I used fresh pumpkin and they were amazing. Rather than roll in sugar and cinnamon I simply sprinkled with confectioners sugar. So good and the pumpkin flavor was “so fall”!

I made this twice. The first time, I followed the recipe exactly as told. I ate them with and without rolling them in cinnamon and sugar (I prefer them with). It was just okay for me. I normally enjoy pumpkin flavored desserts, but I didn’t like it so much this time. The pumpkin flavor was a bit too overbearing with each bite. However, I loved everything else about it. I thought it was light and fluffy. I also enjoyed that they weren’t too sweet. Because I liked everything else about the recipe except for the pumpkin, I used sweet potatoes the second time around. They were heavenly! So, if the pumpkin doesn’t workout for you, give sweet potatoes a try. I want to add that the batter is a little thick, so it is important that the temperature of the oil is just right and that the portions for each ball is kept at about a tablespoon or smaller. Otherwise, they will be gooey in the middle, and/or burned on the outside… Not that that happened to me… I’m just saying, you know, just in case.

1 1/2 cups all-purpose flour
1 1/2 teaspoons baking powder
To Find Out All The Yummy Ingredients And The Step By Step Directions To Follow for this Delicious recipes,Go to the next page.