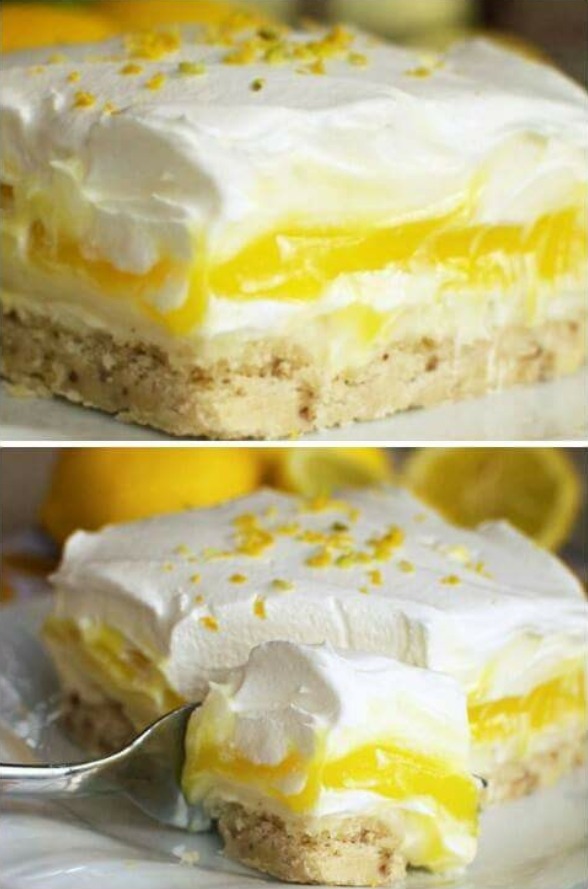 OK-This recipe has such potential to be better than a five-with slight modifications. I must agree with the rest – the lemon pudding itself was fake tasting and I too had to add lemon juice and lemon rind to kick it up to a nice lemon taste. Now in doing that my lemon pudding got a little too runny and didn’t set up as nice. Next time I will add a little less liquid(in the milk/heavy cream) to compensate for the lemon juice. To make the pudding mix layer itself I did use half heavy cream and half milk-because it makes the pudding soo much more rich and tasty. I also used fresh whipped cream (2cups heavy cream, 3/4 cup sifted confectioners sugar and a squirt of vanilla-whip in chilled bowl with chilled wisk or paddles) instead of cool whip and it was awesome. This really is such a great little recipe that is soo easy to make with such a nice combination of flavors-cream cheese,lemon and fresh whipped cream. YUMMY!! Don’t pass it up-just make sure to add either the lemon juice or lemon extract if you have it.

This recipe isn’t something I would have prepared for myself, because I don’t like lemon pudding mix or Cool Whip, but I made it for my great-uncle who loves both. It was a huge hit with him. I’m not sure why people bother to make recipes full of ingredients they don’t like, then write negative reviews. Create your own versions using ingredients you like, and then submit them for publication. This recipe is simple, inexpensive, and works great for people who enjoy the ingredients.

I have this same recipe and the lemon cheese cake is a definite show stopper. Except one thing, for the bottom crust I use 1 1/2 cups chopped pecans or walnuts and 1 cup flour and 1 stick of butter. The rest is all the same and it is fantastic. I call a recipe like this, an Impressor. Guaranteed to impress.

This is a definite family request at our holiday get togethers and all our summer picnics! It tastes just like a cool & creamy version of lemon meringue pie, but better 🙂
I add 2 tablespoons of lemon juice to the cream cheese part and I also use confectioner’s sugar instead of granulated. Every once in a while I add a half of an 8 ounce container of Cool Whip to my cream cheese layer and cut back on my sugar. I also make sure to buy a couple of extra boxes of Lemon Pastry Creams from the Girl Scouts, because I crumple a few up to sprinkle over the top of the Cool Whip~yummy!

Oh baby! This was amazing! I used a Keebler Shortbread crust because I really didn’t want to have the oven on when it’s so hot, and this dessert was fabulous. I’m sure I’ll experiment with different puddings, like other reviewers, but it will be hard to improve on the original. A definite keeper recipe!

Perfect for a Holidays!!
I also made it with banana pudding and put sliced bananas on the crust before adding the pudding.
Also I cut all the ingredients in half and pout it into a 7×11 pan – it was perfect!!

This is excellent! I used lite Cool Whip, low-fat cream cheese, & skim milk, and I also used 1 cup of ground walnuts in the crust. Delicious!!

* 1 cup butter, softened but not to room temperature
* 2 cups flour
To Find Out All The Yummy Ingredients And The Step By Step Directions To Follow for this Delicious recipes,Go to the next page.