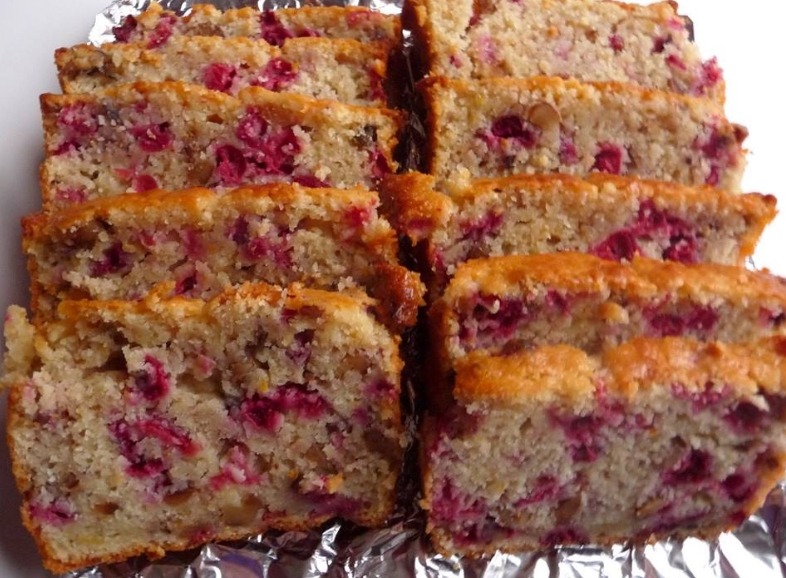 Like it claims, this is very moist. Yum! Used frozen cranberries which works fine. The way the ingredients are combined per direction s is a bit different from the average quick bread, but I followed directions with no problems. I did lightly dice my mandarin oranges. Note that I used my largest loaf pan and there was too much batter for it. It was right to top and was fearful it would poof and go all over my oven. So I ladeled out some and put in a prepared small loaf pan. My cooking time for both was longer than stated, so just keep an eye on it. Tastes amazing!

My family loves quick breads and this recipe was a huge hit. I had many bags of cranberries in the freezer and used one of them in this recipe. I just added the 2 cups to the batter in the frozen state. I baked them in four (6 x 3 1/2) small loaf pans rather than one big pan. This loaf is moist and packed with flavor. I found that this is a very good loaf to freeze and it thaws nicely. I will be making this one again.

Very moist and flavorful bread! Although I did sub yogurt for sour cream I don’t think it altered texture or flavor too much. Also, this is the first cranberry bread recipe with the berries scattered on top with sugar sprinkle and that really made it taste over the top.

This bread is delicious! It certainly took longer to cook than the recipe stated though. Mine was in for well over an hour. I didn’t like how the recipe called for this to be mixed together. My batter turned out lumpy after mixing melted butter with dry ingredients. Next time I will combine ingredients in a manner I am more familiar with. Overall this bread was awesome. I will be preparing it for a church function next month.

Eventhough I have my favorite cranberry bread recipe, I tried this one. ‘Never used orange extract before & trying to get fruit in the children, I went for it. 🙂 1 3/4c sugar seemed like a lot of sugar – more like the amount for a cake, or two loaves. Yes, I admit it, I reduced it to one cup. I stopped myself from other changes except for oven temperature. Oh, I didn’t do the fruit & sugar topping thing. Oh, & I only had a cup & a half cranberries. Hey, it’s all I had that were useable! 😀 Oh, yikes :D, I changed the directions: Creamed the butter & sugar, added the eggs. Combined the milk & sour cream (which I think could be subbed for buttermilk it would seem). Added the extracts to the milk mixture then added that to the combined dry ingredients. Folded in the berries & oranges. 9×5 loaf pan, 350 the whole time, an hour ten. Sum up: Not as good as my regular cranberry loaf by carol. This one is a little dense & moist enough. A cup of sugar was fine. If I were to play with it, I’d probably increase liquid/fat & add another egg or baking soda/powder. It makes a big loaf. There aren’t really enough oranges or cranberries (yes, I had half cup less). ‘Should’t be as fruity as fritcake, but more could be used for sure – at least in my opinion.

2 C. self rising flour
1/2 C. sugar
To Find Out All The Yummy Ingredients And The Step By Step Directions To Follow for this Delicious recipes,Go to the next page.