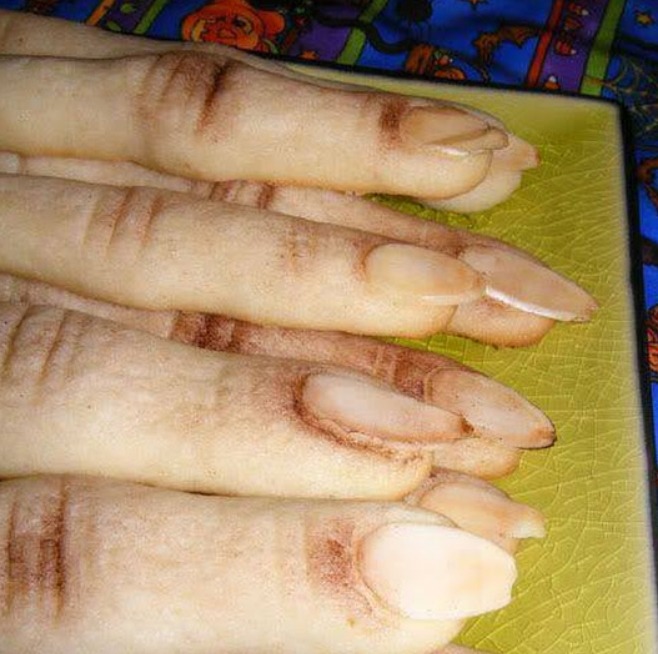 I made these cookies for my son’s school party and they were a great hit. We added green food coloring to the dough and when I took them out of the oven I added a single chocolate chip for a wart. We also added red gel food coloring for the severed end of the finger. The cookies do enlarge when baked (almost double the thickness) so make sure you don’t make them to round when you are rolling them out. The cookie flavor was good on top of looking great, thanks for a fun recipe.

Great recipe! Instead of using decorator gel, I dipped each almond in strawberry jam, and pressed them into the raw “finger” tip before baking… produced very gory results!

I have been making this dessert every year for my annual Halloween party for the last 10 yrs. I don’t use wax paper to shape the fingers, just my well-washed hands. I then use a sharp knife to cut in the knuckles and finger lines, dipped in hot water between cuts. Also, I add the red gel frosting to the base of the fingers as if they’ve been pulled out of their socket – gross! That way, you don’t have to mess with the almonds. You can also add chocolate chips to them right after they come out of the oven to add flavor and “warts”. Lots of great feedback ever year, my guests now expect to see them!

I use the Canadian Living Cooks witch finger recipe (pretty much the same), but I thought I’d let you know that if you don’t have red gel, I simply use raspberry jam (just a touch) and then put the almond “nail” on top to let the jam ooze out a bit. It bakes just fine. And do make sure you let the dough chill, because one time I was impatient and they became very fat witch fingers!

This is a cool recipe. I am not a fan of sugar cookies so I rated it a little higher that I really thought it should be (flavor wise) other wise I would have given it a 5 because it is such a good idea. When making the fingers you have to make them SUPER thin. About the size of your pinky finger in width (unless you have “man-hands” or are a man. My first batch was more like monster fingers.

I LOVE THESE!! One person talked about warts, so I tried to make some. Another person made them green, I loved that idea. So I had to try, this is what mine turned out like. Otherwise I followed the recipe to a T. The mice are cake balls.

i have been making these treats for the past 10 years or so! i saw martha stewart making them on her show – she called them “severed fingers” and use her recipe (recipe varies). i just loved reading the reviews! this halloween i will use this recipe and follow other member’s advice and make them green and w/chocolate chip “warts”! for the fingernails, i usually blanche the almonds – put in boiling water for 1 minute or so and then drain. when slightly cooled you can pop off the almond skin. when the blanched almonds are dry simply “paint” with red food coloring! use beaten egg white to brush over entire finger and to stick the finger nail on. hmmm – this just gave me an idea! i think i’ll paint designs on the nails w/food coloring pens! thanks in advance for the new recipe and inspiration!

Sugar cookie dough…
To Find Out All The Yummy Ingredients And The Step By Step Directions To Follow for this Delicious recipes,Go to the next page.