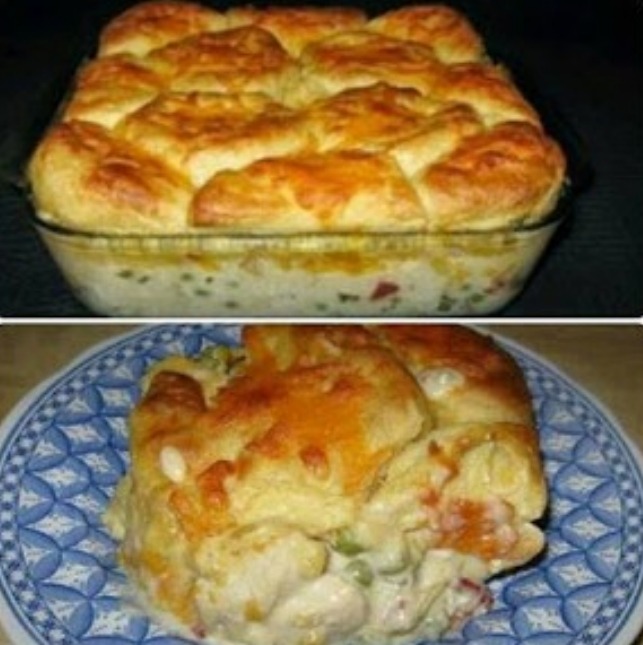 I made this 1 other time before and followed the recipe to a T. It was very good and the proportions are very balanced. This time I made sure to cut the celery and carrot pieces smaller than the onion so that they are all done at the same time. I also substituted some half-and-half for the chicken broth (1/4 of the portion) just to give it some richness and color. I added about 3/4 tbsp. of poultry seasoning and a dash of cayenne. I used frozen peas instead of canned and did not bake the biscuits with the casserole. I used frozen buttermilk biscuits and poured the mixture on top. I love the way that the biscuit melts when the sauce is poured on it. This time it came out DIVINE.

This is a staple wintertime recipe. Also, hate to say it, but I’ve made it both with chicken broth and then with 4 bouillon cubes + 4 cups water. Now I like to go “fresh” when I can, but it was much blander with the chick. broth. Tastes considerably better with the bouillon cubes; either way, it’s an excellent recipe, and nice to see a casserole without a can of soup in it, and also with so many fresh veggies.

UPDATE: Try this recipe with mashed potoatoes on top in lieu of the biscuits called for (i.e. like a chicken shepherd’s pie). I got this idea from Rachel Ray. All in all, I prefer this better as is (i.e. with a biscuit crust), but had to give it a try… This is an excellent recipe!!! My friend who has the “favorites” cookbook recommended it to me (it’s in the original paperback). I do not like the “crust” part of pot pies, but I love the filling, so this recipe is perfect for me! The biscuits are just yummy! I made this casserole for my parents and they loved it too! I added some fresh mushrooms, pearl onions and a little cookig sherry (you could also use white wine…) to make it extra special 🙂 I made more than 8 biscuits (8 didn’t seem to be enough to cover the entire 9×13 pan) and didn’t flatten them as the recipe directed (I just spooned heaping mounds of biscuit mix onto the filling). This dish pairs nicely with a tossed salad. I’ll definitely make this again. It’s a keeper! Thanks for sharing!!!

1 can (10 3/4 ounces) Cream of Chicken Soup
1/4 cup milk
To Find Out All The Yummy Ingredients And The Step By Step Directions To Follow for this Delicious recipes,Go to the next page.