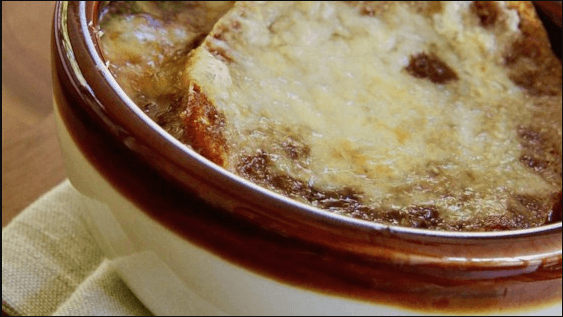 This is a great recipe. I couldn’t find Emmental so I subbed in Swiss. If you put the bread right in the soup it kind of soaks it up and turns soggy so you can coop that right up with your spoon along with the soup – or, if you don’t like soggy bread you can not do that. The bread is definitely key, though.

We thought this soup was amazing. I followed the recipe exactly and my husband and I did not think it was too sweet or that the red wine vinegar tasted odd. I used the mandolin for slicing the onions which made it pretty quick and easy. Will definitely be making again and would be super easy to serve to guests.
This was fabulous!!! Loved the sweetness of the onions…..all the slow cooking made them very tender. The spices and stock were perfect. Even my husband (who doesn’t like onions) thought it was very good!! All the taste of the original, but of course, healthier!!

WOW! I carmelized my onions early this morning. (took about an hour). I wouldn’t skip this step – IT IS what makes the soup. You just can’t duplicate that flavor! Also do NOT skip the sherry! I used Swanson beef stock, fresh thyme and a dried bay leaf. It is in the crock pot now and will be ready for when we come back from two junior high basketball games around 7 pm. Having it with hamburgers for dinner tonight. It is going to take ALL OF ME not to go in the kitchen to ladle a bowl in secret! WISH I had oven proof crocks, that way I could broil the cheese on top of the soup…..but we will improvise and it will still be great! GREAT RECIPE!

Had found a similar recipe online before but decided to try this one and it’s awesome! I love making soup in my crock pot and french onion is the best! I will add though, if you want a little something to enhance the flavor or just for a little flair add soy sauce. Don’t ask me why or how but I definitely think a little bit of that absolutely finishes this soup. Strange, I know.

I made this soup over the weekend and it was great. The prep time was a bit longer than i’m used to for a slow cooker dish, but it was well worth it. Based on the prior reviews, I caramelized the onions. It was worth the extra time. The process released so much sugar that I may skip the tablespoon called for in the recipe the next time. I was out of cooking sherry and used a Merlot instead. After the prep time, the soup spent about 5.5h on high before being served and going on the high end of 4-6h did not compromise the texture. The final product was delicious and the recipe is now in my “Recipe Box”.

Heat butter in a large, heavy pot over medium-high heat; cook and stir onions until they become translucent, about 10 minutes. Sprinkle onions with sugar; reduce heat to medium. Cook, stirring constantly, until onions are soft and browned, at least 30 minutes. Stir in garlic and cook until fragrant, about 1 minute.
Stir sherry into onion mixture and scrape bottom of pot to dissolve small bits of browned food from the pot. Transfer onions into a slow cooker and pour in beef broth. Season to taste with sea salt; stir in thyme and bay leaf. Cover cooker, set on High, and cook 4 to 6 hours. If desired, set on Low and cook 8 to 10 hours.
About 10 minutes before serving, set oven rack about 8 inches from the heat source and preheat the oven’s broiler. Arrange bread slices on a baking sheet.
Broil bread slices until toasted, 1 to 2 minutes per side.
Combine Gruyere, Emmental, Parmesan, and mozzarella cheeses in a bowl, tossing lightly. Fill oven-safe soup crocks 3/4 full of onion soup and float a bread slice in each bowl. Top with about 2 tablespoons of cheese mixture per serving.
Place filled bowls onto a baking sheet and broil until cheese topping is lightly browned and bubbling, about 2 minutes.

You do not HAVE to caramelize the onions, you CAN simply melt the butter in your crock, add the onions to coat them and then add all the ingredients and cook. HOWEVER, caramelizing the onions makes for a much much better soup!!!! 🙂 If you like, simply put all the options out on the table and let people make their own! This seems to be the popular method when I have a craft night. People can make their own decisions about what they want in or on their soup!