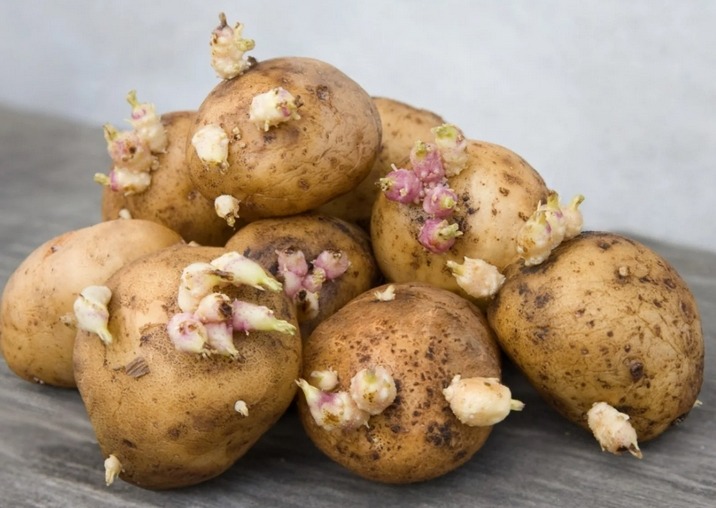 Why Do Potatoes Sprout?

Potatoes sprout when conditions, whether inside the soil or out, reach around 68 degrees F, according to The Irish Times. In other words, that nice, stable temperature inside your house tricks potatoes into thinking it’s spring — and time to sprout. The part of the potato plant we eat is its tubers, which store excess nutrients until spring, when they convert those nutrients into energy and start growing sprouts.

Sprouted potatoes do have the potential to be toxic because of a chemical called solanine. Potatoes and other nightshades, such as eggplant, tomatoes, and peppers, are naturally predisposed to produce solanine, which is toxic to humans if it’s ingested in large enough quantities. When potatoes are dormant, solanine isn’t an issue, but if potatoes aren’t stored properly or kept in ideal growing conditions, they start producing solanine in their sprouts. The tubers themselves will also turn green if they’re exposed to too much light, and that signals solanine production as well.

Additionally, when potatoes start sprouting, their nutrients start fading away because they’re being transformed into sugar. If they’re left alone, they’ll shrivel up and become unsafe to eat entirely.

However, you cannot cut the sprouts off and expect the potato to become nontoxic. Poison Control recommends throwing these potatoes in the trash but Dr. Rich Novy has a more nuanced approach and, as a geneticist, he is well qualified to answer this question. He works with the USDA Agricultural Research Service. In his mind, the answer is pretty simple.

Sprouted potatoes contain higher levels of glycoalkaloids, which can have toxic effects in humans when consumed in excess. Eating sprouted potatoes during pregnancy may also increase the risk of birth defects.

Can You Eat Sprouted Potatoes?

Sprouted potatoes that are still firm, have relatively small sprouts, and don’t show any wrinkles or shriveling are okay to eat, as long as you cut off the sprouted parts and soft spots.

However, there’s still a chance you could get sick. If your potato is sprouted and shriveled up, then it’s too far gone. Potato sprouts should not be eaten.

What Can You Do With Sprouted Potatoes?

If your potatoes are too far gone to eat, they haven’t entirely gone to waste. They’re growing anyway, so you can add them to your garden and they’ll produce unsprouted tubers in the years to come. Find out more about growing sprouted potatoes.

You can keep your potatoes from sprouting by storing them somewhere cool (not cold, like your refrigerator) and dark. If you don’t have a dark space where you can store your potatoes, you can keep them inside a paper bag to filter out the light.

Is the potato already soft and mushy? If so, this is a sign that it needs to be disposed of. If the potato is still hard, that means that it can be salvaged. Take the time to store your produce properly if you are looking to steer clear of these types of tough decisions.