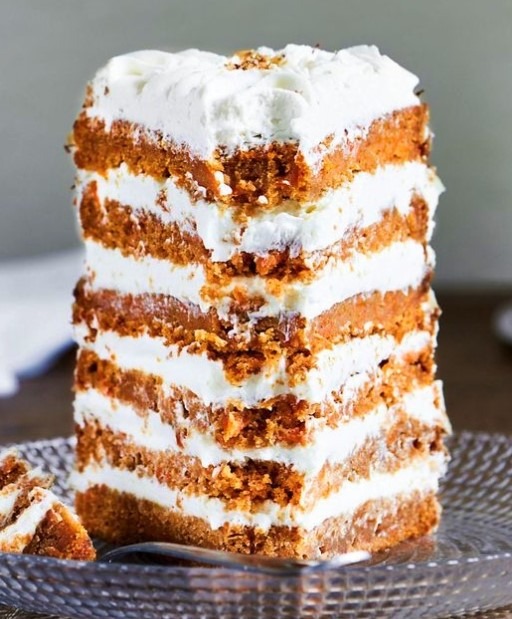 Preheat the oven to 180C/350F. Grease two 8-inch cake pans with cooking spray and lightly dust it with almond flour.
In a large mixing bowl, combine your almond flour, baking powder, baking soda, cinnamon, nutmeg and salt, and mix well. In a separate bowl, using a stick mixer, beat together the eggs and sweetener until smooth and almost double in size. Add in the vanilla extract. In a third bowl, whisk together the rest of the ingredients, until combined.
Fold through the dry ingredients into the egg/sweetener/vanilla mixture, until just combined. Add the remaining ingredients and mix until fully incorporated.
Distribute the cake batter amongst the two cake pans and bake for 30-35 minutes, or until a skewer comes out mostly clean.
Let the cakes cool for 10 minutes, before carefully turning them on to a wire rack to cool completely. Once cool, layer and frost, before letting it sit for 30 minutes, before serving.