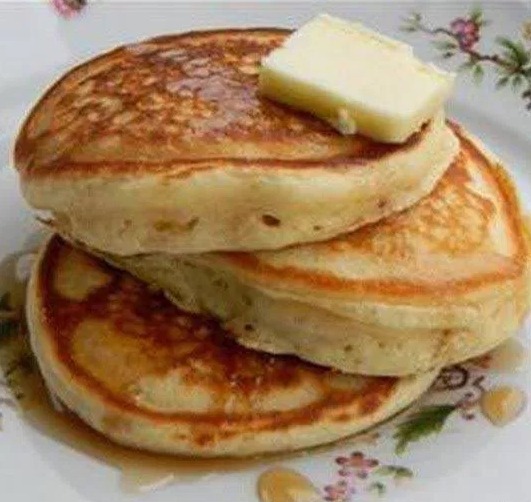 A pancake (or hotcake, griddlecake, or flapjack) is a flat cake, often thin and round, prepared from a starch-based batter that may contain eggs, milk and butter and cooked on a hot surface such as a griddle or frying pan, often frying with oil or butter. In Britain, pancakes are often unleavened and resemble a crêpe. In North America, a leavening agent is used (typically baking powder). American pancakes are similar to Scotch pancakes or drop scones. Archaeological evidence suggests that pancakes were probably the earliest and most widespread cereal food eaten in prehistoric societies.

The pancake’s shape and structure varies worldwide. A crêpe is a thin Breton pancake of French origin cooked on one or both sides in a special pan or crepe maker to achieve a lacelike network of fine bubbles. A well-known variation originating from southeast Europe is a palačinke, a thin moist pancake fried on both sides and filled with jam, cheese cream, chocolate, or ground walnuts, but many other fillings—sweet or savoury—can also be used. When potato is used as a major portion of the batter, the result is a potato pancake. Commercially prepared pancake mixes are available in some countries.

Pancakes may be served at any time of the day with a variety of toppings or fillings including jam, fruit, syrup, chocolate chips, or meat, but in America they are typically considered a breakfast food. Pancakes serve a similar function to waffles. In Britain and the Commonwealth, they are associated with Shrove Tuesday, commonly known as “Pancake Day”, when, historically, perishable ingredients had to be used up before the fasting period of Lent.

This is a great recipe that I found in my Grandma’s recipe book. Judging from the weathered look of this recipe card, this was a family favorite.

Anybody can add water to a boxed package mix, but you’ll be glad you made these tender, light, buttery, and delicious pancakes!

This is a great recipe that I found in my Grandma’s recipe book. Judging from the weathered look of this recipe card, this was a family favorite.

1.Sift together flour, baking powder, salt, and sugar in a large bowl.
2.Whisk in melted butter, egg, and milk until combined.
Let batter rest for 5 minutes.
3.Preheat a large skillet over medium-high heat.
Spray with cooking spray.
Pour batter into the hot skillet, about 1/4 cup of batter for each pancake.
Cook for 2 to 3 minutes, until bubbles appear on the sides and center of each pancake.
Flip and cook until golden, about 1 to 2 minutes.