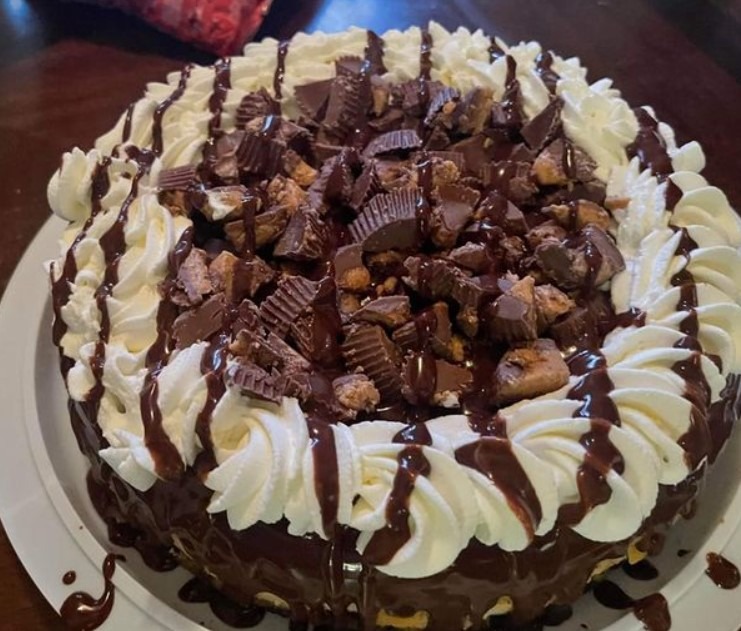 Preheat the oven to 350°F. Line the bottom of a 9-inch springform pan with parchment paper cut into a circle to fit the inside bottom of the pan. Lightly spray the pan with non-stick spray and set it aside.

Using a medium-sized mixing bowl, stir together the boxed brownie mix, vegetable oil, water, and beaten egg just until ingredients are combined.
Pour batter into prepared springform pan. Bake for 35 minutes.
Remove the pan from the oven and immediately sprinkle the chocolate and peanut butter chips onto the top of the hot brownie, in an even layer. Allow the brownie crust to cool on the counter while preparing the cheesecake filling.
Reduce the oven temperature to 325°F.

Using a stand mixer, or a large mixing bowl with a handheld mixer on medium speed, cream together the cream cheese until smooth.

Add the sugar and vanilla extract and continue to mix on medium-high speed for another 1-2 minutes, scraping down the sides of the bowl when needed, until the mixture is smooth.

Reduce the speed to low and add the eggs, one at a time, mixing well after each egg. Do not overmix.
Keep the mixer speed low, add the creamy peanut butter and the heavy cream. Continue mixing until everything is completely incorporated. Use a rubber spatula to fold in the quartered mini Reese’s chocolate cups.

Pro Tip: For baking the cheesecake, it is extremely important that your oven temperature is accurate. Since some ovens cook at higher or lower temperatures than others, it is best not to just go by cooking time but also go by if the cheesecake is cooked through.

Pro Tip: To check for doneness, when your cooking time is up, your cheesecake center should just slightly jiggle or wobble. If it is really jiggly still, you need to bake a bit longer.
Remove the roasting pan from the oven then remove the cheesecake from the roasting pan. Allow the cheesecake to cool on the counter for another 1 hour or until cool enough to place into your refrigerator to continue to cool for another 3 hours.

Using a medium-sized heat-safe bowl, combine the heavy cream and semi-sweet chocolate chips Heat in the microwave for 45-second intervals (or if your microwave has a melt setting), stirring after each interval until the chocolate is smooth.
Pour the ganache slowly onto the top of the cheesecake and gently smooth it on top.
Evenly sprinkle the top of the ganache-covered cheesecake with the quartered Reese’s chocolate candies.